Back on Island Time: A Recap and Update on our Return to Post-Irma Tortola 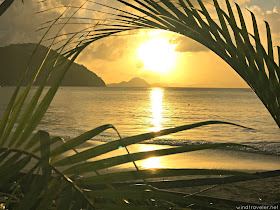 The only time I actually got teary about our return to Tortola was during take off on the puddle jumper in San Juan, Puerto Rico. It had been an emotional few months. We were back in the US on holiday, when - days before we were scheduled to fly back - a massive hurricane named Irma demolished our island, home and livelihood. As a result, we were 'displaced' for over four months. We made the most of it, as any of you who follow our Facebook Page know; we met up with friends, we made new ones, we fundraised almost $170K for our island, and spent the holidays with family. We went to movies, dinners and we even went skiing....yes, our time in the US was nothing short of wonderful, but it was still not "home". So on that flight - that tiny little nine seater that I love and loathe so much - I felt four months worth of heartache, anticipation and excitement bubble up in me and, well, I got a little choked up.

But that's where the emotions subsided really, at least the ones that brought tears to my eyes...which actually surprised me. I had mentally prepared myself for this return, both out of self preservation and on Scott's urging (he'd been back and forth several times since the hurricanes). I also prepped the girls. There was no question that the place we left for our annual summer holiday in July was not the place we'd be returning to in January. "Tortola is not going to look like it did when we left it" I kept telling them. "We know mommy!" they would sigh (we had this conversation a lot) "It's all broken up, we *know*..." they'd say like it was no big thing, like I was asking what color the sky was. As for myself, I prepped like I do for any big moment in life: moving abroad, long sailing passages, cruising with a baby, twins, flying with kids and just about every other occasion that warranted planning: expect the worst, hope for the best. If there is anything I can pat myself on the back for it is an ability to know what I am getting into due to very calculated and ninja-like method of preparation. I was primed for some sadness and shock, and I was definitely ready for tears.

So as the azure blue of the Caribbean sea made way to our beautiful island of Tortola, I was struck by one observation: from a distance, she looks the same. (And I, for the life of me, could not get that damn Bette Midler song "From a Distance" out of my head...) But when I came to that realization, that beautiful and simple realization, the only emotion that was left was pure, unadulterated happiness. I knew then that we were going to be okay, and whatever tears I thought I might shed upon arrival were replaced with a shit-eating grin.

Our plane touched down on Tortola soil and I was hit by the familiar sweet, sticky heat that I missed so much. The girls were giddy and punch drunk from almost twelve hours of travel, and as we clamored out of the tiny plane they giggled and jumped and we took in our surroundings. "Look mommy, a broken palm tree!" "Look at that broken car mommy!" "There's no windows over there mommy, hurricane Irma did that!" they observed... Sure, things were a bit worse for wear, there was no doubt about that. But it wasn't that bad. It was nothing that we hadn't seen in pictures and nothing that some time and hard work couldn't fix. The blue sky, the sun shining, and that lovely winter trade wind breeze was still there. It was all I needed to know we were back where we belonged, and it felt so. very. good.

Driving back to our home marina of Nanny Cay, we saw closer up what the aerial view from the plane did not expose; broken buildings, abandoned cars, entire homes demolished with only a single toilet left standing to let you know that, yes, just four months ago someone actually lived here. Sure, it was sad. And to know that so many people are still unemployed and struggling on a daily basis, that is very hard. But nothing about the state of the island was utterly shocking to me. Nothing really took my breath away. Call it a point for social media; but I knew more or less what to expect. Sure, seeing it in person is a little bit different, but after scrolling through hundreds of photos and having spoken to many on-island friends, I felt well prepared. As our taxi man, Larry, navigated potholes new and old, the girls pointed out all the broken things around us (like it was a game) I challenged them not to find the broken things, but the beauty around us instead... And, as kids do, they changed their tune completely; "Look at those beautiful pink flowers!" "And those baby cows! Look, beautiful cows mommy!" and "Look at the water mommy, the water is beautiful..." and it is, the water and the views are still breath-taking...

We arrived to our temporary residence, the catamaran that my mom had bought right before the storm to use as her base for visits. Miraculously, it survived - almost unscathed - only a couple slips down from where our boat sank. The girls ran into like it was no big thing. They claimed rooms, started un packing their things and playing. Like we'd lived here forever. I immediately went into organizing mode and started assessing storage and where things would go, keeping in mind that this is a temporary dwelling and we'd be moving again in a couple of months, and that's when I saw her out of our front window: Legato. Our old boat who had been found on the bottom of our marina a month after Irma and who'd been raised and laid haphazardly on her side along the break wall in the place that is now referred to as "the graveyard". She is a sorry sight and almost unrecognizable; her name nearly completely rubbed off, her once-sparkling navy hull now a dullish gray-blue due to the murk from a month on the seabed, and her rigging in tangles on her deck and all around her. While it is sad to get an eye full of her nearly every day, she is a reminder that we have not given up and we are moving on. Life after Irma gave us a lot of perspective, namely: a boat is replaceable. People are not. We are blessed and lucky and can and will rebuild. We unpacked a few things and hit up the beach bar where we were greeted with happiness and hugs, the girls went running off on an adventure on their own, they didn't miss a beat... We even left a pair of flip flops buried in the sand like old times. It was almost as if we hadn't left.

"How *are* you?" people will ask us in earnest with a gentle shoulder touch and heavy look in their eyes. I feel almost guilty shrugging and saying, "We are fine, we are really just *so* happy to be back." I also feel guilty for people thinking that we have any reason not to be fine. Sure, we lost a hell of a lot in Irma and she really knocked us off our feet - but she did that to every. single. other. person who lived here as well - and we are far luckier than most. We didn't have to live through the horror of the storm, were 'displaced' in a familiar place with familiar people, we had solid insurance (that has paid out!), a roof, power, and take-out and Uber and organic food... we could flush our toilets, come and go as we pleased and we could cook on a stove. We were fine. Coming back we have returned to a very comfortable boat with air conditioning, a cooking stove and electricity. We live in Nanny Cay, arguably the most recovered and comfortable place to live at the moment, with a vibrant community, a fully stocked grocery store, coffee shop and beach bar with nightly barbecue specials (THERE IS TACO TUESDAY NOW, PEOPLE!)....we cannot complain. "Honestly, we are just so happy to be back" is what I say to everyone, and I mean it with all of my heart. Maybe that makes me odd, but the destruction doesn't really bother me that much. And the girls? They don't give a hoot about it. Kids are truly amazing in that way, their resilience is inspiring.

We have been back just over two weeks and the thing is this: while everything looks VERY different, (the destruction from this storm is everywhere, overwhelming and almost too much to comprehend)  the BVI still FEELS the same. In fact, in some ways, I even like it better than before. It's a little grittier, a little more raw, a little less crowded and it feels more rustic. As someone who used to live in a little cowboy town in East Africa, I like rustic. We didn't move here for the architecture, the restaurants, or the cuisine...we weren't here for the glitzy night-life, spas, fantastic road quality or the bustling city center. We were here because we love living on the water and beacause we love this community. Because we love the melting pot of cultures Tortola provides and the fact that our girls greet at least ten different nationalities and dialects on a daily basis...we were here because most of our waking hours are spent outside in the sun, running around barefoot in the sand or climbing trees or swimming in pools.... we were here because the pace of life is a little slower and planning an outing with friends takes minutes, not weeks....we were here because this little group of islands - the BVI - are so. damn. beautiful and unlike any other place on earth.... we were here because we can hop in our boat and have lunch on a new island in less than an hour....we were here because people are more laid back, rules are not so rigid, and we can be a bit more "heathen" and a little less "uptight"....we were here because the characters we meet on a daily basis range from the crazy to the quirky to the profound and we learn from all of them... we were here because I truly believe this is one of the greatest places to raise little children in the world...the list goes on. My point is this: all of that is *still* here.

So - don't get me wrong - Tortola is still struggling and the road to recovery is a long one, I do not want to sugarcoat that. I have an overwhelming amount of respect for those people who were here for the storm, and those people who have remained to rebuild in the aftermath. I honestly cannot imagine what they all endured....Help is still needed here and it will be an uphill battle for quite a while, years in fact. But for us, at least, it's okay. In fact, it's better than okay.

To see more pictures of our daily goings-ons, please follow us on Facebook (@sailwindtraveler) or Instagram (@windtraveler), where I am posting daily.  More blog posts and updates to come! Thank you for your notes of concern and patience. My email has been more or less neglected since having the twins (cringe) but I appreciate all your kind notes. Thank you for being an amazing community for us.